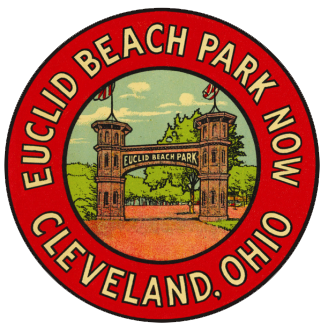 Euclid Beach Park Now is a 501(c)3 non-profit organization dedicated to preserving the history and memories of Cleveland's greatest amusement park for the enjoyment of current and future generations. Since 1989, EBPN has preserved artifacts and memorabilia of the park and continues to research the park's history and share our discoveries with our members in the quarterly newsletter The Arch.

EBPN's many activities include sponsoring memorabilia shows, multimedia educational presentations, and speaking engagements. Our organization maintains an active historical archive which is continually updated and has published a book chronicling the Park's rich history. We actively support the preservation of any remaining physical artifacts from Euclid Beach Park.

We welcome your membership and appreciate your support to help preserve the memories of Euclid Beach Park for future generations. Thank You.

Send your check with your Name, Address, Phone Number and Email Address to:

With your story, please include your name and contact information.

By submitting, you are agreeing to allow EBPN to use your submission as deemed necessary to further our Mission.

Do You Remember EBP (pdf)

Latest Issue of THE ARCH

Due to Covid-19 publication of The Arch was held up. These three issues were sent out in one mailing on October 26, 2020.

LAST DANCE AT THE BEACH

Have you ever experienced seeing a window into the past? I have! Most of us have fond memories of visiting a favorite amusement park. For me, that park was Euclid Beach on Cleveland’s east side. I lived just a short drive from the park, and I remember my parents taking me there when I was very young to enjoy the kids’ rides. As I grew older, I moved on to the adult rides like the Thriller, the Racing Coaster, and the Flying Turns. But one think puzzled me about the park. It was the Dance Pavilion, a big empty building that never seemed to be used. Maybe I was just there on the wrong night I thought. The Dance Pavilion was built when the park opened in 1895. The red maple dance floor was 18,000 square feet. The building had a second floor balcony and an outdoor promenade. It could hold 2000 dancers. At one time the park advertised it as the largest ballroom in the world! It was a major attraction at the park for many years. During its heyday, the Dance Pavilion would host dances twice a day, seven days a week. The afternoon dance was from 2pm to 5pm, and the evening dance was from 8pm to midnight. Under the park plan, dancers would pay for a two dance set lasting 5 minutes. Two park employees with a long rope would then clear the dance floor. The park had their own house orchestra, but once a week they would host a visiting band. Names like Eddie Duchin, Ozzie Nelson, Lawrence Welk, and Tommy Dorsey graced the stage. Tastes changed however, and the last regular dance was held in 1959.

During the sixties, it was open for special events. The Beach boys performed there and a few picnic groups held a dance, but otherwise it sat empty, a relic of a bygone era. I worked as a ride operator at the park during its final season in 1969. Daily I would walk by the Dance Pavilion, but the doors were always shut. I wondered if it would ever be used again. May, June, and July had already passed by. Time was running out! In August, a Slovenian group held their picnic at the park. They called their picnic “A Salute to Euclid Beach”, and they were going to have a dance in the ballroom!

Many Slovenians lived in the area. The Slovenian Workman’s Home was just a mile south of the park. When the day of the picnic arrived, the park was packed with happy people, eager for a good time. As evening grew near, the lines for the rides grew increasingly long. Then, it finally happened – the Dance Pavilion opened and eager dancers streamed in. It wasn’t the big band sound of the past that they came for, but music that they brought from the old country. Soon the dance floor was full, and people gathered on the veranda as well.

I stood outside the Dance Pavilion and drank in the experience. The air was warm with a light breeze off the lake. Sounds of polkas and waltzes drifted outdoors and mixed with the sounds of the park: the happy music of the carousel organ, the screams from the roller coaster riders, and the crashes from the bumper cars, I knew this night would never be repeated, and it never was. For a brief moment in time, a window to the past was opened, and I saw what Euclid Beach looked like during its prime. Once again dancers glided across floor of the Dance Pavilion as they had done so many times in the past. I had never seen the park so alive. It was a magical evening, and it was over too soon! My window to the past closed that night, never to be reopened. In September, the park closed forever. The mirror ball from the Dance Pavilion was sold to the Slovenian Workman’s Home, where it continued to enchant dancers with it magical rays of light. It was a fitting souvenir of the last dance, at the Beach.

Family Owned and Operated Since 1897

Click "Learn More" to see what products are available and where to buy.